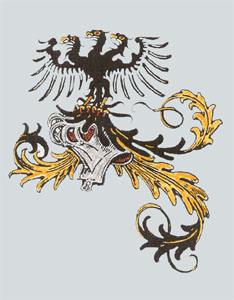 Henry Lyman Parsons Beckwith was born 22 May, 1935 in Providence, Rhode Island, the eldest son of Henry L.P. and Sarah Cutler (Greene) Beckwith. He is married to Alice Hayes (Reid) Hauck Beckwith, and they currently reside in Wickford, Rhode Island.

Mr. Beckwith has been interested in heraldry since childhood. He has been Secretary of the Standing Committee on Heraldry of the New England Historic and Genealogical Society, founded in 1864. It is the oldest unofficial body concerned with heraldry in the world. Mr. Beckwith has served in this role since 1969, a post he inherited from a distant kinsman. He belongs to several international heraldic groups, and has published a number of studies on armory in various journals. Mr. Beckwith has also been qualified and has given testimony as an expert witness in Federal Court in the areas of heraldry, flags, seals, and cognate matters. Mr. Beckwith also serves on The Heraldry Committee of the New York Genealogical and Biographical Society, founded in 1869.

Mr. Beckwith has also served on a number of committees and commissions of the Town of North Kingstown, Rhode Island, including the Conservation Committee and Tree Board; the Historic District Commission; the Wickford Planning Committee; and formerly on The Updike Park Restoration Committee, which he also chaired.