Accepted Customs And Practices For Dress And Insignia

Each hereditary society and order has published regulations concerning the use of their various medals and decorations. The rules for the proper usage of insignia vary among the different organizations. Members are encouraged to review the particular protocol of an organization when attending either their formal or informal functions. The following is a general summary of the rules governing the wearing and use of insignia and related items. This information is provided as guidance in order that all may conform therewith, to the end that the prestige and esprit of the hereditary community be maintained and the dignity of their proud backgrounds may be enhanced.

Insignia And Decorations For Ladies

It is recommended that the insignia and decorations of the hereditary community be worn as prescribed below in keeping with customs and tradition with: 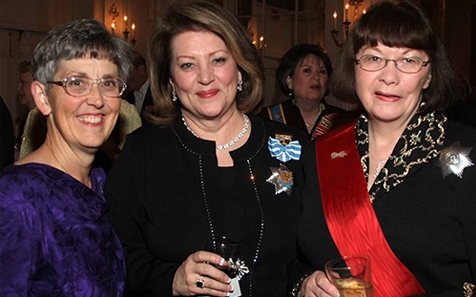 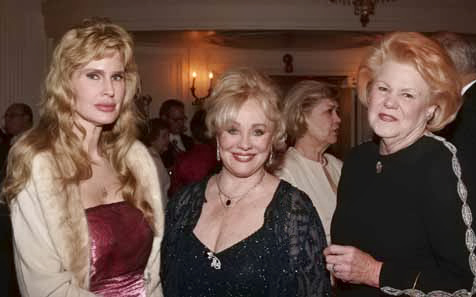 The standard or full size insignia is worn by members on formal occasions, over the left breast. Generally, standard insignia for ladies is to be worn only at functions of the respective society, and not displayed with other standard insignia. Some societies make allowances for wearing standard insignia when members are either representing the society at an event, or when attending ceremonial occasions. Ladies standard insignia may not be altered by jewels, inscriptions or any other device. Jewelry such as brooches or pins may not be worn above or directly adjacent to insignia. The wearing of a necklace is, however, an acceptable practice.

The sash ribbon is worn by officers and past officers on formal or semi-formal occasions. It extends over the right shoulder diagonally to the left hip with the society medal pendant from the bow at the intersection of the end over the hip. The sash may not be worn over a top coat of any kind, except a suit coat, nor with a pants suit. As with the wearing of standard insignia, the sash may be worn only at official society functions where the member is representing the respective society. It may also be worn at ceremonial occasions.

Formerly, miniature insignia or medals were considered inappropriate for ladies, unless attired in a dress military uniform. As some societies today have only miniature insignia available to members, they are now appropriately worn with proper ladies' formal evening attire.

Many organizations issue recognition pins and charms. The recognition pin should never be attached to a ribbon, but worn as prescribed by each society. Both of these items may generally be worn upon any occasion.

The National Society Daughters of the American Revolution is the largest and one of the most distinguished hereditary societies in existence. Because of this, we have included here specific information regarding DAR insignia regulations. HSC would like to thank the DAR Insignia Committee for allowing the inclusion of this information.

The official ribbon is not to exceed five ribbons measuring 14 inches in length and is to be placed on the left shoulder. Ribbons of eight or more inches in length shall start at the shoulder seam. Pins must be placed in order, beginning with the highest office at the top of the ribbon (nearest the arm if wearing more than one ribbon), with pins being placed in descending order on each consecutive ribbon. The official Insignia shall be placed at the bottom of the innermost (neck side) ribbon. The current placement of pins can be found on the members’ website on the Insignia Committee page and as part of the DAR Insignia Store catalog.

The DAR Insignia should be worn only at functions of the National Society, state organizations or chapters or when representing the organization.

It may be worn during the dedication of a grave marker for a deceased Daughter and also at the funeral of a Daughter. Daughters may sign the memorial book as DAR members.

The DAR insignia should not be worn on the street, in a restaurant, cocktail lounge or other public places unless a DAR or allied function is taking place. 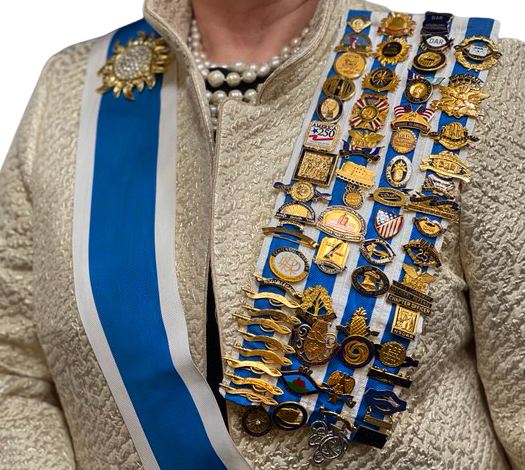 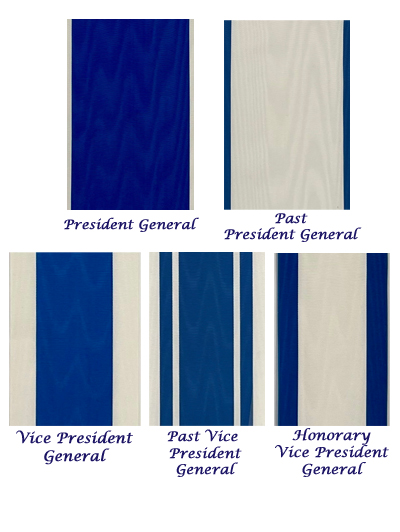 During the Installation Service, the outgoing corresponding officer places the sash symbolizing continuity of office. In the absence of this officer, the First Vice President General places the sash.

By ruling of the National Board of Management the official sash must be worn in a uniform manner, that is, over the right shoulder and under the left arm. The sash should be hem length. Only two pins should be worn on the sash, one to fasten the sash at the shoulder and one at the hip.

Members of the National Board of Management are not to wear campaign emblems on the sash. The emblem of the current administration may be worn on the sash.

The sash, like the Insignia, should not be worn on the street, in restaurants, cocktail lounges nor in a public place unless an official NSDAR function is taking place then and there. The sash may not be worn over a topcoat of any kind, except a suit coat, nor with pants. The sash may be worn at a funeral by a member attending only in an official DAR capacity. 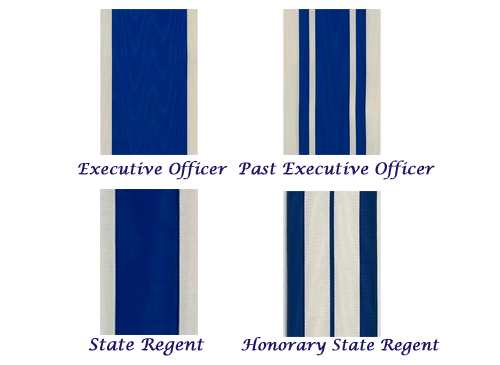