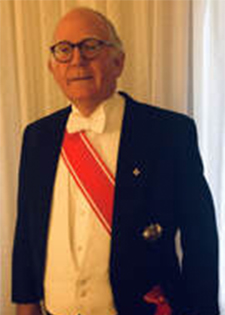 Peter Irving Channing Knowles II, Captain USAR (Ret.) a twelfth generation Virginian, was raised in Richmond. He and his wife Brantley Carter Bolling Knowles have been married for over 50 years. They maintain residences in both Richmond and Palm Beach, Florida, where they are active in both communities. The Knowles have two sons, one grandson, and three granddaughters. His wife was President General, 2018-2021, of The Society, The Colonial Dames of America, founded in 1890.

Mr. Knowles is a graduate of St. Christopher’s School (Richmond), was graduated from the Virginia Military Institute (VMI) in 1970, where he received a Bachelor of Science in Civil Engineering, and was a Distinguished Military Graduate. Mr. Knowles is a retired Captain in the United States Army Reserves.

Mr. Knowles is a retired general contractor specializing in historic preservation. His early career began at Taylor & Parrish, INC (Richmond) which he later purchased, retiring in 2002 after selling the business. He has worked on or been a consultant to numerous iconic properties and historic churches throughout Virginia and the eastern seaboard from the 17th, 18th, and 19th centuries. In addition, he has built numerous churches, hospital additions, and buildings for schools, universities, and clubs.

The Most Venerable Order of St. John of Jerusalem (Bestowed by Her Majesty Queen Elizabeth, II), Commander - North America Priory

Mr. Knowles has been a keen student of military history since his VMI years. He is particularly interested in the War of Independence and the period of Colonial Wars.