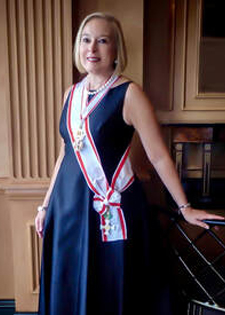 Professionally, in Washington, Ellen was employed by the Corcoran Gallery of Art as Director of Retail Operations, where she directed all operations of the Museum Shop business, including opening two off-site stores for the Corcoran and fourteen satellite stores. In 2009, she was asked to consult for a new museum store startup and oversaw the opening of the Katzen Arts Center at American University. She also traveled throughout the Baltic to consult for Boutique Sales for Princess Cruise Lines. Ellen then joined the staff of Tiffany & Co. as an Operations Professional working with inventory management, merchandising, customer service and business accounting. Of particular interest was working with the one of a kind pieces in the Tiffany Blue Book Collection.

In 2011, Ellen began at the National Geographic Society and is responsible for all aspects of the retail store business, including product development, buying, marketing, staffing and budgeting. She especially enjoys developing community relationships with artists, and traveling to source items from around the world for the business. She continues to enjoy her work at the Society and is an active member of the Museum Store Association and the American Alliance of Museums.

Ellen has been involved at St. Francis Episcopal Church in Potomac, Maryland since 1987. She served four terms on the Vestry as Junior and Senior Warden and was a Board member of St. Francis Episcopal Day School. She has chaired the Potomac Country House Tour, the Auction, the Patrons and Friends Committee and the Art Show. She served as Convener for the Lay Committee for a new Associate Rector and a Seminarian. She is on Altar Guild, the Usher team and is a Chalice Bearer.