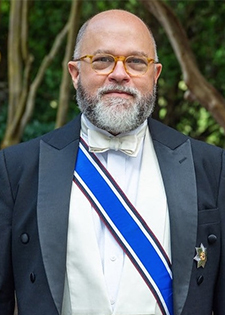 Brenton Simons has changed the face of nonprofit-based genealogy in America by bringing the best scholarship to millions of users for more than a decade as President and CEO of the New England Historic Genealogical Society (2005 to present ~ www.AmericanAncestors.org) anchor location of the PBS series Finding Your Roots with Henry Louis Gates, Jr. He has orchestrated an historic expansion of the organization ― the founding genealogical institution in America and a frequent partner to national hereditary societies ― it now serves almost 400,000 members and millions of online users in 139 countries with 1.4 billion records. An award-winning author, he has been featured on CNN, FOX, BBC, and PBS, as well as in The New York Times and elsewhere. His most recent book, Boston Beheld, was hailed as “the book Jane Austen might have written had she run into Dickens after his return from his Boston visit of 1842.” He has presented genealogies to or hosted benefits in honor of former UK Prime Minister Sir John Major KG; Pulitzer Prize-winning authors David McCullough, Doris Kearns Goodwin, David Hackett Fischer, Stacy Schiff, and Joseph J. Ellis; filmmaker Ken Burns; actress Dame Angela Lansbury; biographer HRH Princess Michael of Kent; and many others.

Honors: The Award of Merit, American Association for State and Local History, 2006; The Spirit of 1812 Award, The National Society United States Daughters of 1812, 2016; Award of Recognition, Society of Colonial Wars in the State of Illinois, 2019.