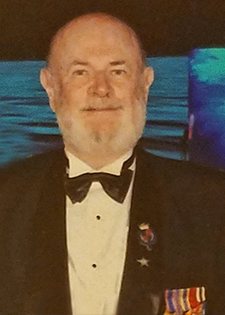 Charles Bryan Poland was born in San Diego, California, the eldest of four sons, to Clarence Beauregard Poland III and Margaret Albertine White Poland. Chuck resides in Roanoke, Virginia. He is the widower of Karen Iola Milner Poland whom he married in 1965. His son Carl Bryan Poland lives in Washington, DC. His daughter Jeanette Marie Poland is deceased.

Mr. Poland attended schools in California, Washington, and New York. Mr. Poland was Valedictorian of his class at Leigh High School in San Jose, California, He graduated from Michigan State University with a Bachelor of Science degree in Social Science, with honor.

Poland was employed by IBM for 30 years, in New York, Maryland, England, France and Japan. He began his career in large systems hardware and software development, and later shifted to technical support and marketing.

Mr. Poland is the Founder and Inaugural President General of two royal orders, Order of Alba, established for lineal descendants of the monarchs of independent Scotland, and Order of the House of Wessex, established for lineal descendants of the old Anglo-Saxon Kings (prior to the Norman Conquest). He was appointed as a Founder and Inaugural Officer of four additional orders

Mr. Poland is an Eagle Scout. He is Past President of the Glen Condo Homeowners Association.