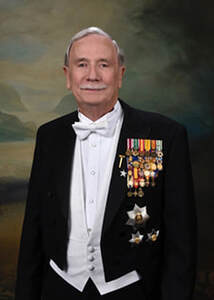 LTC Charles Robert Odom, a native of Durham, NC, is the son of the late Guilford Ennis and Effie Cacindy Nash Odom. He was married to the former Carla Lucille Whitehurst of Durham on June 6, 1964 at Grace Baptist Church, Durham. They have two daughters, Charlotte Martin Odom Lytle Perrin, Catherine Lynne Odom Quick and three grandsons.

Mr. Odom was educated in the Durham Schools. At Campbell College he was Treasurer and a charter member of Nu Kappa Chapter of Alpha Phi Omega, Service Fraternity, President of Phi Beta Lambda, President of North Carolina Future Business Leaders of America, and selected the North Carolina’s Future Business Leader of the Year. Mr. Odom completed undergraduate work with a B.S. degree in Business. After a brief career with Carolina Power and Light Power Company in Raleigh, North Carolina he enlisted in the U.S. Army during the buildup of the Vietnam War.

Lieutenant Odom graduated from Officer Candidate School at Fort Lee, Virginia and was immediately deployed to the Republic of Vietnam where he served as an Engineer Supply Officer and later as a Subsistence Supply Officer. Following an assignment as a Test Officer at the U.S. Army Test and Evaluation Command at Aberdeen Proving Ground, Captain Odom graduated from the Quartermaster Officer Career Course at Fort Lee. He deployed to the Republic of Thailand and was appointed Executive Officer to the Depot Commander and later Secretary to the General Staff for the U.S. Army. At Fort Rucker, Alabama he commanded the 108th Quartermaster Company followed by duty as Chief of Protocol. He graduated from Troy State University with a MBA.

At Campbell University, Major Odom was an Assistant Professor of Military Science with the ROTC Detachment and he was inducted into the Faculty Senate. He graduated from the United States Army Command and General Staff College at Fort Leavenworth, Kansas . He was deployed to Heidelberg, Federal Republic of Germany, at the United States Army Europe Headquarters in the Office of the Deputy Chief of Staff for Logistics. LTC Odom’s final military tour was a five year assignment at the United States Army Logistics Management College (ALMC) at Fort Lee, Virginia as Director for both the United States Army Auditors and Major Items Management Courses. He is a graduate of a number of the other courses at ALMC. LTC Odom also served as a guest lecturer at the Command and General Staff College, Fort Leavenworth, Kansas. He retired in the Regular Army rank of Lieutenant Colonel.

His post-military career included employment as a Systems Analyst at Computer Science Corporation, Co-Owner of B&O Computers, and recently as a G.E.D. Instructor. The Odoms returned to Durham after living around the world including 33 years in Virginia.

LTC Odom is of the Baptist and Episcopal Faith, and a former lector, Sunday School teacher, and member of the choir. He is the former President of the Chapel Council at Mark Twain Village Chapel, Heidelberg, Germany, Chairman of the Board of Deacons, and Director of the W.W. Hammond Recital Series at Mount Pleasant Baptist Church, Colonial Heights, Virginia, and Junior Warden of Saint Paul’s Episcopal  Church, Petersburg, Virginia.  He has performed solo, in quartet and with choirs, where duty called, in churches and choral festivals in America, Vietnam, Thailand and Germany.  The Odoms are members of St. Luke's Episcopal Church.

The Rotary Foundation of Rotary International named LTC Odom as a Paul Harris Fellow. He is former President of the Colonial Heights Club and a twenty-five-year member. He and his family received the Family Life Award as Family of the Year from the Coats Women’s Club. LTC Odom is former Chairman of the Board of the Fort Rucker School Association, member of the Board of Visitors at Mary Baldwin College, and for many years Class Agent for Campbell University. He is a former member of the Petersburg Music Festival Chorus and Vice President, Board of Directors of Crater Community Hospice.

For several years Charles Odom and his wife supplied and posted colors for individual patriots interred at the Spanish American War Cemetery, on the grounds of the Hampton Veterans Medical Center, Hampton, Virginia. During his administration President General Odom presented the National Society Sons and Daughters of Antebellum Planters bronze marker and certificate of award to Shirley Plantation at Charles City County, Virginia and to the Richard Wainwright Barber Farm, Rowan County, North Carolina. He has served as sponsor for 21 hereditary groups for their respective events held at the Army and Navy Club, Washington.

He is a member of the Army and Navy Club of Washington, D.C. He serves as an Adjunct Director of the Swamp Fox Board of the Umstead Pines Club of Durham, NC. LTC Charles Robert and Carla Whitehurst Odom established a Hereditary Society Community Scholarship at the College of William and Mary.

LTC Odom is the recent recipient of the Order of El Cid Merit Award.