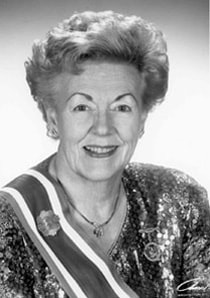 Eleanor Warrene Smallwood Beasley Niebell was born in Washington, D.C., the daughter of Graeme T. Smallwood and Dorothy Hubbell Smallwood.  She was married in 1943, in Washington, D.C., to William Niester Beasley and the mother of twin daughters.  Her second marriage in 1955, in Arlington, VA, to Paul Milton Niebell and the mother of two daughters and one son, deceased.  She resided in Potomac, MD.

Mrs. Niebell's early education was in Washington, D.C., much under private tutelage.  She later studied in Geneva, Switzerland and in Brussels, Belgium.

The Most Venerable Order of the Hospital of St. John of Jerusalem (Commander Sister Grade III, C.St.J.)

Mrs. Niebell is the author of Centennial Plus One, The Centennial History of the National Society Children of the American Revolution 1895-1996.  She was a member of the Smithsonian Benefactors Circle, and a life member of the Maryland PTA.  Mrs. Niebell was an active member of St. George's Episcopal Church in Glenn Dale, MD.