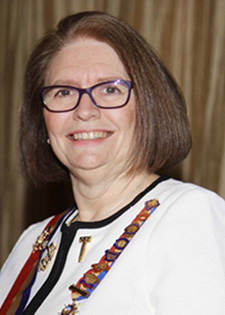 Kimberly Kay Ormsby Nagy, M.D., is a native of Toledo, Ohio. She is the daughter of Donald E Ormsby and Ruth A. Steinbrecher, and has two children, Donna Maria Nagy and Amanda Leigh Nagy. Kim completed her undergraduate work at the University of Toledo with a B.A. She completed her M.D. at Ohio State University, and subsequently earned her PLCGS (Professional Learning Certificate in Genealogical Studies) at the National Institute for Genealogical Studies. Dr. Nagy is now retired after 30 years as a Trauma Surgeon at Cook County Hospital in Chicago, IL.

Dr. Nagy has been researching her family for over 40 years. Since retiring, she has more time to help others with their research as well as her own. In addition to the lineage societies listed above, she belongs to several Genealogical societies, including the Association of Professional Genealogists, the National Genealogical Society, as well as several local and state societies. She enjoys speaking about genealogy to these societies. She is also a prolific author, and her publications will be available for review on her personal listing. Kim is active in her community through First Congregational Church of Downers Grove, P.E.O., and other local community service groups.