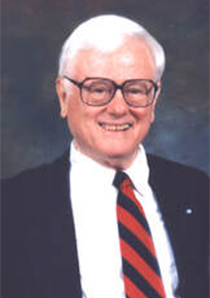 Charles Owen Johnson, Esq., was born in Monroe, LA, the son of Dr. Clifford U. Johnson and Laura (Owen) Johnson. On graduation, Mr. Johnson received a B.A. from Tulane University, being elected to Phi Beta Kappa. Later he received a LL.B. from Harvard Law School, a JD from Tulane Law School and a LL.M. from Columbia Law School.

Mr. Johnson, a member of the Louisiana State Bar Association and the Federal Bar Association enjoyed a successful career in law in Louisiana and Washington D.C. Mr. Johnson served for twenty-four years in the Tax Court Litigation Division of the Chief Counsels Office, Internal Revenue Service, and as Chief of the Court of Appeals Branch, the last eleven years of his service. He was in the Army of the United States from 1950-1952, during the Korean Conflict, and was an overseas veteran the last year. Mr. Johnson resided in Arlington, VA, and Palm Beach, FL (his winter home).

Mr. Johnson served as first editor of Hereditary Register of the United States of America, under the President and General Editor, John Griffin Richardson Rountree. He was also chairman of the editorial committee. Mr. Johnson was a member of the English-Speaking Union of the United States, the Harvard Club of the City of New York and the Harvard Club of Washington, D.C. He was active in a number of Fraternal Orders and is a Perpetual Member of Alexandria-Washington Lodge No. 22 AF&AM in Alexandria, Virginia, of which George Washington once served as Worshipful Master. He was a member of the Harvard Club of Boston, Massachusetts; the Round Table Club of New Orleans, Louisiana; and the Army and Navy Club of Washington, D.C.