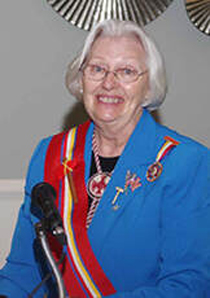 A native Georgian, Patricia Ann Scott Williams Garner was born to J. B. Scott and Frances Jones Scott at Rome Georgia. She is the widow of Colonel Willie D. Garner, Sr. She is of Native American heritage and serves as a healer of the Cherokee Tribe. Mrs. Garner also has many verified colonial and royal lines in America and Northern Europe. This candidate has two daughters, both graduates of Georgia Colleges, and three grandchildren, two college graduates, one of whom is a graduate of the United States Air Force Academy and on active duty as a First Lieutenant in the United States Air Force. Ann Garner taught him to fly. Her youngest grandson is a college sophomore and participating in the ROTC program.

Mrs. Garner retired from military duty in the rank of Major in the National Guard having served last as a Family Services officer. She has been employed for the past 18 years as General Manager of Dawson Municipal Airport. She was formerly a registered nurse and a dental hygienist, Ann Garner served in the medical field for 33 years prior to moving to Parrott. She owns a small farm where she grows cotton, peanuts and blue berries. She is also a Huguenot descendant and remains engaged as an artisan and silver smith. Additionally, she is proficient in Native American beading and garment designs, the creator of a number of the society portfolios and tote bags seen in DC during the heritage season, and various fine needlework. She supports a local Christian ministry in Parrott, Georgia by donating the space in two commercial buildings for worship and family activities. Recently she served as Mistress of Ceremonies and a primary benefactor for the Purple Heart Memorial Highway dedicated from Columbus to Albany, GA.

Ann Scott Williams Garner is considered by her peers as a leading example of a Renaissance Woman, as a Marine, Native American healer, nurse, hygienist, airport manager, pilot, silver smith, needle crafter, heritage leader, and officer, deceased military officer's wife, mother and grandmother She is a member of 30 plus hereditary societies.

Mrs. Garner is a member of The Army and Navy Club of Washington, DC and serves to sponsor CSDIW that holds Annual Board meetings on that site.