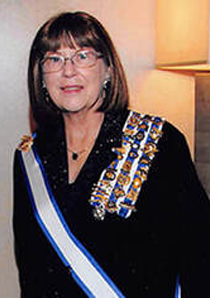 Carole Jean Drake Belcher is a native of Binghamton, New York. She is the daughter of Carroll Clayton and Geraldine Skinner Drake. Carole is married to William Walter Belcher, and they have two children, Jon and Katryna. Carole received her B.S. in Library Science, and is a professional registered parliamentarian. During her career, Carole was a junior high school librarian, and is now retired.