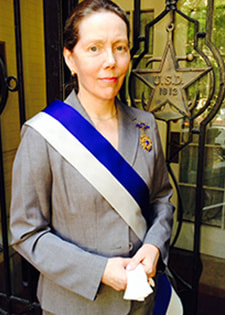 Jacque-Lynne Amann Schulman was born in Baltimore, Maryland, to Ignace Lee Amann and Jane Dunnock Brewer. She is a life-long resident of the greater Washington Metropolitan area. Her Maryland ancestors arrived in the mid-1650s and settled in what is now Calvert County. Her home is within a few miles of the original tract of my Preston ancestor Thomas Preston (1650s). Her Virginia legacy are Jamestown 1609 and Northampton County Virginia 1633. Ms. Schulman has two children Joshua Schulman (Karen DiLossi) and Jon Schulman (Katharyn Nolan). She has a BA from George Washington University, she attended MS Catholic University, MS George Washington University, and was a PhD candidate at Virginia Polytech – VPI.

Milton United Methodist Church, Dorchester, Maryland, (Past President of Trustees; Chairman of the Church Council), she has enjoyed the opportunity serving as a Chaplain for several State Hereditary societies.

Ms. Schulman is currently writing a history of the Church Creek Charge of the United Methodist Church. The first Methodist Church built in the Eastern Shore (1787) Dorchester County is in that Charge and on the NRHP.