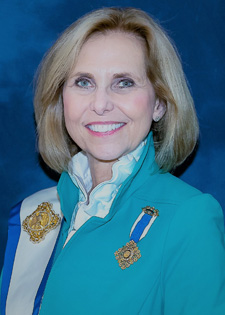 Lynn Forney Young was born in Houston, Texas, the daughter of the late Byron Parish Forney and Patricia O’Tyson. She is married to Steve Young and they enjoy their two children, and three grandchildren.

She attended Stephen F. Austin State University and earned a B.S. from the University of Houston. She is currently a co-owner of the family cattle business, San Andres Cattle Co., LLC.

Highlights of her term as President General, NSDAR (2013-2016) included celebrating the 125th anniversary of the founding of NSDAR, the first DAR Day of Service and achieving the Guinness World RecordTM for patriotism during the 125th Continental Congress. Further, the generous support of members established a permanent endowment fund for the preservation, restoration and conservation of the historic DAR headquarters near the White House.

Mrs. Young is active in her church, currently serving as Chairman of the Board of Stewards.

She served as Chair of the Milam County Historical Commission for four years and serves on the Executive Board of the El Camino Real de los Tejas National Historic Trail Association.

Mrs. Young also serves on the Board of Trustees of the Kate Duncan Smith DAR School.