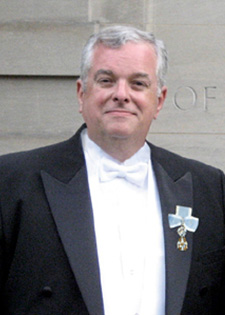 Ross Gamble Perry, a native of Nashville, Tennessee is the son of John Edward and Sally Granger Perry. He is married to Diane Hanretty Perry, and has two daughters: Kathryn Patterson Perry and Sarah Ross Perry

Mr. Perry was graduated from the University of Virginia, with a B.A. Economics. He retired in 2013 from a 40-year career in banking; the last 30 years with SunTrust Bank in Richmond, VA and Washington, DC. Upon retirement, Mr. Perry was Senior Vice President and Managing Director, Private Wealth Management Division.

Mr. Perry is a member of Christ Church Alexandria, Virginia. He served on the Lab School of Washington Board of Trustees from 1995-99 and the Virginia Opera Board of Directors from 1996-2008. Mr. Perry is a lifelong hunter and target shooter.