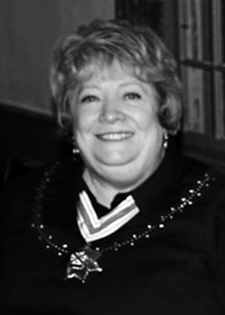 Maurene Gayle Mast Coan is a native of Flossmoor, Illinois, and the daughter of Maurene June Frey and Casper Leo Mast, Jr. Gayle’s maternal grandfather was a 32nd degree Mason and also a Commander of the Englewood Commandery in Chicago. He became a dedicated genealogist in his fifties and gave the family the groundwork for not only joining genealogical organizations, but also the names for further research. Gayle is married to Thomas Donald Coan, Jr. They reside in Flossmoor, Illinois, in the home built by her parents.

Mrs. Coan attended the University of Colorado and graduated with a B. A. degree in Education. Returning to her childhood school, Gayle taught at the Flossmoor Junior High School. In addition to being the head of the math department, she completed many hours of advanced education. Since retiring from teaching, she continues to do data entry work for the district periodically throughout the year.

Gayle is a member of Saint John the Evangelist Episcopal Church in Flossmoor. She organized and heads a retirement group of teachers from her school district. She is a member of the Annual Illinois Heritage Weekend Planning Committee; a Chi Omega Sorority Alumni donor; Director’s Club member of the University of Colorado Alumni Group; a member of the Smithsonian Museum; a Founder Member and donor of the Williamsburg Foundation; a Historic Gettysburg-Adams’s County donor; a Civil War Preservation Trust donor; a National Trust donor for the preservation of historic sites, a USO donor; and a member of the Underhill Society.