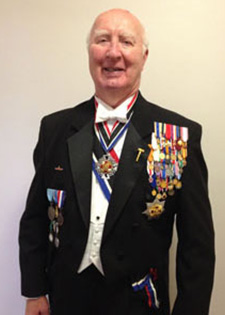 John Mackintosh Bourne, son of Catherine Jane Mackintosh and Henry Thayer Bourne, is a life-long native of Ohio.  Except for his years in Philadelphia where he earned a Bachelor of Science degree in Economics from the University of Pennsylvania and a Masters of Business Administration from the Wharton School, he has spent all his years in the Cleveland area.  He and his wife Judy currently live in the city’s University Circle neighborhood surrounded by the Cleveland Museum of Art, the Cleveland Orchestra, the Cleveland Clinic, Case Western Reserve University and their Church.  He is the father of four and grandfather of eight.

John’s first business career was in commercial banking, first as the youngest vice president of a bank which became part of the current Key Bank; and later as a vice president and lending department manager with Bank One, which became part of JP Morgan Chase.  His second career was in commercial real estate. John is a senior Certified Commercial Investment Member of the National Association of Realtors and was Broker/Owner of statewide Bourne Commercial Realty before retiring in 2012.

He has served on numerous boards and committees and was an elected councilman for 13 years when he lived in a suburban Cleveland community.  He is an ordained Elder of the Presbyterian Church, USA, and has served as Chairman of the Personnel, Budget and Finance Committees and as a Trustee of their Church.

John’s third career is hereditary societies.  He is a member of more than three dozen societies, all focused from the Colonies and Revolutionary War back to the Royals. His first leadership position began in 2004 as Ohio Society Governor of The Order of the Founders and Patriots of America.  He has continued as Ohio’s Governor ever since, except from 2008 to 2010 when he was national Governor General of Founders & Patriots and became a member of The National Gavel Society.  Also in 2008, John served as President of the Western Reserve Society, the largest Sons of the American Revolution chapter nationwide with over 400 members.  When SAR held its national Congress in Cleveland in 2009 John was awarded their Meritorious Service Award.  John has also been actively involved with the National Society Sons and Daughters of the Pilgrims, both as Ohio Branch Governor continuously since 2008 and as national Captain General 2011 – 2013.

On the national level, John has been the Governor General to three additional societies: The Plymouth Hereditary Society 2012 – 2014; The National Society Sons of the American Colonists 2013 – 2015; and The Society of the Descendants of the Colonial Clergy 2014 – until 2017.  He has also served as a national officer of the Order of the First Families of Maine, the Descendants of Cape Cod and the Islands, the Dutch Colonial Society and Presidential Families of America.  In 2009, our late HSC Honorary Member, The Rev. Dr. Dixon A. Barr, swore John in as an Honorary Kentucky Colonel in Louisville in recognition of his support in preserving Colonial History.  Last year the Order of Founders and Patriots presented him with their highest level of recognition allowed for a member, the Distinguished Service Award.  While there was no Bourne family on the Mayflower, John is an approved descendant of ten of those passengers and if you have ever visited Cape Cod you probably travelled across the (his) Bourne Bridge to get there.

Mr. Bourne is a member of the Honorable Order of Kentucky Colonels. He is an Ordained Elder with the Presbyterian Church USA. He attends Church of the Covenant, Cleveland, and is a former Trustee and Chairman of Personnel, Budget and Finance Committees.

Additionally Mr. Bourne is a former Councilman of the Village of Kirtland Hills. He is also former Vice President and Trustee of the Boy Scouts of America, Northeast Ohio Chapter.