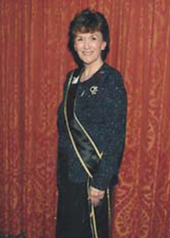 Sharyn “Shari” Kelley Worrell, a native of Lynn, Massachusetts is the daughter of Richard Allen and Norma Lovett (Gregory) Kelley.  She has a son, Ryan Richard Worrell, Esq. and enjoyed a career as a flight attendant; now retired. She has three grandsons; Ryan, Jr., Daniel and Oliver. Shari is involved with numerous avocational pursuits and devotes significant time to the lineage society community, where she has served in many organizations in various capacities.

Shari is very active in volunteer organizations, including, at various times: Boy Scouts of America where she developed religious growth programs and was awarded Den Leader of the Year Award, Chartered Organization Rep of the Year and the Servant of Youth Award; President of the Good Shepherd Hospital Auxiliary where she created an ongoing Children’s Art Display in the Cardiac wing; served on the Los Angeles MDA board and co-founded the Young Women’s League for Muscular Dystrophy Association.

Shari is a member of First United Methodist Church of Canoga Park. She has served her church in many roles including New Member Chairman; Secretary of the Congregation; Assistant Superintendent of Sunday School; Secretary of the Board of Education; Public Relations Chair for the school and church.

Additionally, she is a member of the Clipped Wings; the Speakers’ Bureau for Los-Angeles Based Flight Attendants; and the Immanuel Lutheran School Education Foundation.

Shari also lobbied for three years for the exoneration of the remaining six “Salem Witches” whom were executed in 1692. On October 31, 2001, Acting Gov. Jane Swift (of Massachusetts) signed the Bill into Law, exonerating all six. Shari’s Committee held a Memorial service in June 2002 in Salem, Massachusetts for these martyrs.