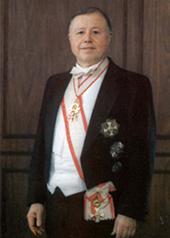 Timothy Field Beard, FASG, was born at Great Barrington, MA, the son of Stuart-Menteth Beard II, and his wife Natalie Sudler (Turner) Beard.  He was married at Christ Church Methodist in New York City, September 12, 1963 to the former Annette Knowles Huddleston, who died in New York City January 28, 1995. She was the daughter of the late William E. Huddleston, Jr., of Clanton, Alabama and Alma F. Robinson of Gadsden, Alabama.

Mr. Beard was educated at the Indian Mountain School, the Berkshire School and was graduated from Williams College and Columbia University. During the Korean War, he was Supply Officer at Bordeaux Air Force Base in France.

Mr. Beard served as Librarian in the Local History and Genealogical Division of the New York Public Library and was formerly Director of the Minor Memorial Library and the Hodge Memorial Library in Roxbury, Connecticut. He is the author of How to Find Your Family Roots (McGraw-Hill, 1977) and is a Fellow the American Society of Genealogists and the New York Genealogical & Biographical Society.  Mr. Beard is Past President of the Connecticut Society of Genealogists.