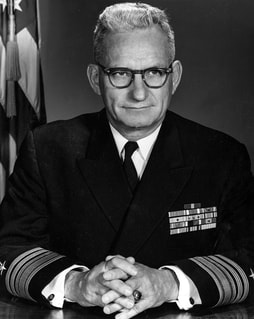 RADM Kleber Sanlin "Skid" Masterson, Jr., was born in San Diego, California. He and his wife, Sara Cooper Masterson, have two sons, Thomas Marshall Masterson, M.D. and John Cooper Masterson, Esq. RADM Masterson completed his undergraduate studies at the United States Naval Academy, where he graduated with a B.S. in General Engineering in 1954. He received his M.S. in Physics from the United State Naval Postgraduate School in 1961, and a Ph.D. in Physics from the University of California, San Diego in 1963. Additionally RADM Masterson was graduated from the Advanced Management Program of the Harvard Business School in 1980. A Rear Admiral in the U.S. Navy during his career, RADM Masterson is also a retired vice president and partner of Booz Allen Hamilton Inc. and retired senior vice president of Science Applications International, Inc.