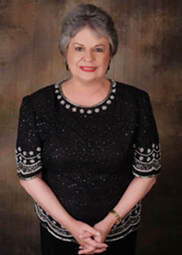 Mrs. McClendon completed her BA as well as her M Ed at West Texas A & M University and enjoyed a career in secondary education, teaching English, art, speech and drama.

Mrs. McClendon has compiled and edited numerous directories and newsletters as well as the OAAA Lineage Book II. She has written articles for and spoken to various societies on both genealogy-related topics and antiques.

In fact, she has recently gone back into the antiques business, opening a booth in a local mall. Other than genealogy and antiques, her interests include bridge, reading, theatre and travel.

A member of various county historical societies, Mrs. McClendon has also been affiliated with Dallas Heritage Village for over 25 years as a docent and fundraiser.

She is particularly proud to be a member of the Honorable Order of Kentucky Colonels.