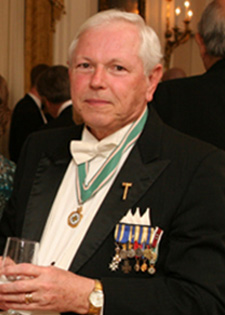 Barrett Lee McKown, son of Harold E. and and Della McCready McKown, was born in Wheeling, West Virginia. Professor McKown was graduated from the University of Maryland, where he received his Bachelor of Science. He then received his Master of Biological Science degree from the American University. Professor McKown married Anne Willson Grim in 1965. They currently reside in Edgewater, Maryland.

Professor McKown was commissioned a Kentucky Colonel by Governor Brereton C. Jones in 1990. He has served on the Board of Trustees of the Annapolis and Anne Arundel County Public Library since 1983; and served as President from 1991-1994. He is a member of the Maryland Military Monuments Commission, having been appointed by the Governor of Maryland in 1994. Professor McKown serves as Archivist for the National Congress of Patriotic Organizations and as President of the Naval Academy Parents' and Sponsors' Club of Maryland.