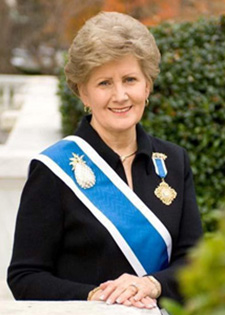 Linda attended College of the Sequoias and completed the business curriculum at Central Valley School of Business. She worked for Schenley Industries as Executive Secretary to the Director of Human Resources and Labor Relations before the birth of her children. She is currently the President and managing partner of the family-owned businesses.

She has served as PTA President at junior high and high school levels and received the PTA Honorary Service Award. Additionally, Mrs. Calvin has served on Visalia Unified School District Superintendent's Advisory Committee, the Advisory Committee on School Athletics, the county-wide Suicide Awareness / Prevention Council; and is a member of many school athletic booster clubs.

Linda is a third generation DAR and was inspired by the dedication of her late mother, Peggy Gist and her late sisters, Barbara Jaggers and Carol Reeder. Their involvement in DAR was definitely been a family affair, all four having served as chapter regents and as California District V Directors. Linda and her two sisters served as pages on the state and national level, were California Outstanding Juniors, and served as National Chairman of the Guest Hospitality Committee. A summary of her involvement at all levels of DAR is included below:

Chapter DAR Service: Kaweah Chapter Regent – 1978-1980, 1988-1990; First Vice Regent (2 terms); Recording Secretary (3 terms) and numerous chairmanships, including American History, Constitution Week, DAR Good Citizens and Junior Membership. In order to remain an active member when her husband was transferred, Linda transferred her membership to Bellefonte Chapter, Pennsylvania in 1972, to John Haupt Chapter, Kansas in 1974, representing both chapters as a page at state conference and Continental Congress before transferring back to Kaweah Chapter, California in 1977.