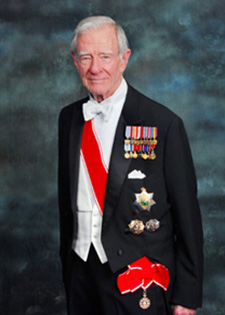 Russell Cecil Scott, a native of Richmond, Virginia, was the son of Frederic Robert Scott, II and Elizabeth Barnett Cecil. Mr. Scott attended St. Christopher’s School in Richmond. He completed his Bachelor of Mechanical Engineering at Cornell University, and his M.S. in Engineering at Princeton University. He was married to Anne Addison Scott, and has three children: Russell Cecil Scott, Jr., Helen MacLaren Scott, and William Norwood Scott.

Mr. Scott served on active duty in the Naval Reserve in World War II and the Korean War, and retired with the rank of Commander. He worked as an aerospace engineer in the development of guided missiles for Navy contractors for over twenty years and was later a lobbyist for non- profit conservation groups. Additionally, Mr. Scott served the Commonwealth of Virginia as an Associate Commissioner of Marine Resources and as chairman of the Virginia Boating Advisory Board.

Mr. Scott served for thirty-six years as an Operational Member of the U.S. Coast Guard Auxiliary, conducting many successful search and rescue missions in tidewater Virginia. He was Commodore of the Virginia Yacht Club on two occasions, and piloted his own boats from Chesapeake Bay south to the sandy beaches of Florida and the Bahamas, and north to the rocky coast of Maine.

Mr. Scott was a member the Commonwealth Club (Richmond), the Country Club of Virginia, the Richmond German, and the University Cottage Club (Princeton).