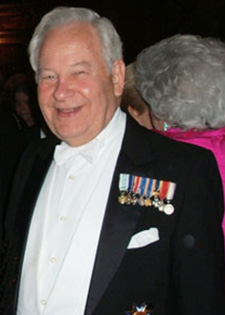 Mr. Zearfoss was a 1947 graduate of Middleburg High School, where he participated in sports and plays and was a member of the band. He earned his B.A. in political science from Bucknell University in 1951. Mr. Zearfoss attended Yale University and joined the Navy. He was a Lieutenant Commander in the U.S. Naval Reserve from 1954 to 1958 and in the latter year earned the Doctor of Jurisprudence degree from American University

Mr. Zearfoss enjoyed a brilliant career as an attorney. He was admitted to the Pennsylvania bar and opened a law office in Lewisburg in 1959, practicing as Fetter and Zearfoss. He then joined the Fidelity Mutual Life Insurance Company in Philadelphia, where he served as Assistant Counsel from 1960 to 1967. He was a Justice of the Peace in Radnor Township, Delaware County from 1966 to 1967 and an officer in the Insurance Federation of Pennsylvania from 1967 to 1968. In 1968 he was elected a State Representative to the Pennsylvania General Assembly and served for five terms, 1968 to 1978. He then returned to the Fidelity Mutual Life Insurance Company, where he served from 1978 through 1982 as Senior Vice President and General Counsel. In 1982 he joined Provident Indemnity Life Insurance, where he served as Senior Vice President, Secretary, and General Counsel. From 1991 until his retirement in 2001 he was Assistant General Counsel and Assistant Secretary at Teleflex, Inc.

Mr. Zearfoss was perhaps best known, as the cheerful, engaged and inspirational leader of volunteer organizations throughout the Delaware Valley. His interests were expansive, stretching, for example, from the Boy Scouts of America to the Civil War and Underground Railroad Museum of Philadelphia (where he served as Treasurer at the time of his death).

In 1945, Herb became the first Eagle Scout in Middleburg. He attended Camp Karoondinha and was a camp counselor. He was an inspirational leader of organizations such as the Boy Scouts, which honored him with the Silver Beaver Award in 1989. He was president of the Genealogy Society of Pennsylvania for 13 years, and was elected honorary president for life, just two weeks before his death. Mr. Zearfoss was also a Kentucky Colonel.

Mr. Zearfoss was a member of the Merion Cricket Club and the Philadelphia Club. He worshipped at Bryn Mawr Presbyterian Church, where he sang in the choir.