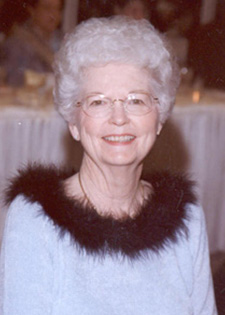 Susan Frances Pierce Patterson, the daughter of Albert Edward and Sarah Frances Jarvis Pierce, was a native of Oklahoma. Mrs. Patterson received her B.S. in Medical Technology from the University of Tulsa. She was married to Mr. Louis Winfield Patterson and had three children Steven Thomas, David Edward (deceased), and Reynolds West Patterson, and four grandchildren.

Mrs. Patterson was a member Delta Delta Delta and the P.E.O. Sisterhood, Freedoms Foundation at Valley Forge, and the Clopton Family Association. She was also member of the United Methodist Church in Dallas, where she was involved extensively with church activities over the years, including choir, teaching Sunday School, and with the United Methodist Women. Mrs. Patterson was also a Kentucky Colonel. She enjoyed genealogy, needlepoint and reading.