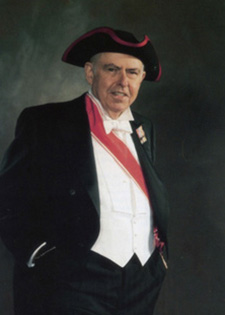 A native New Yorker raised in Darien, Connecticut, Sidney Hughes was the son of the late Sidney Worthington Hughes and Mary Gossler Hughes. Sidney attended the Buckley, Thomas, and King schools, and Yale University. He served in the US Army in the Pacific theatre during WWII. In 1953, he married Annette "Cloty" McMaster. He is survived by his wife, their children, Nancy and Thomas, and two grandchildren, Philip and Matthew, all of New York City.

Sidney was proud of the fact that he never obtained a Social Security Number and stated on more than one occasion that, “his father or grandfather had endowed the Colonial Order of the Acorn so that there would always be alcohol at the events.”

Those who knew Sydney remember a man of great good humor, gentleness and generosity. He illuminated the days of his family with love, and those of his many friends with storytelling, hospitality, and fellowship. His favorite verse of the Bible was “Be not forgetful to entertain strangers: for thereby some have entertained angels unawares.” He was from the old school in New York Society and, in some ways, the 'last of the Mohegans'.

Sidney was well-known for his interest in head covering (with over forty hats in his collection). His tri-cornered chapeau, worn at all Society of Colonial Wars functions, is well known by those who knew him. A writer and raconteur par excellence with an endless repertoire, Mr. Hughes was a member of the Union Club, the Church Club, the Players Club, the Knickerbocker Club, The Brook, the Coffee House. He was also an active member of the Pilgrims and Holland Lodge No. 8.