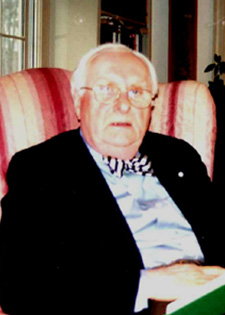 Dr. Henry Jackson Darst, Jr., son of Henry J. Darst and Corine Fortune Darst, was a native of Kentucky. Dr. Darst’s grandfather, Dr. John C. Darst, practiced medicine in Pulaski and Roanoke, and his great grandfather, Major James H. Darst, was one of the most influential men in politics, banking and agriculture in Southwest Virginia. Dr. Darst was reared at Dublin, Pulaski County, Virginia where his ancestors settled when the area was still frontier. His childhood home was within two miles of the graves of three Revolutionary soldiers and officers of the War of 1812 and the War Between the States from whom he descends. At an early age, he learned the significance of his heritage.

Dr. Darst earned his Master’s Degree (History of Social Thought), and his Ph.D. (History of Education) from the University of Virginia. He taught at Lynchburg College and the University of Virginia. Dr. Darst was a senior educator in the Department of the Army and was involved with the graduate civilian education of regular army officers, and overall operation of Army service schools. Since 1960 he operated two farms, 'Bird Hill' in James City County and 'Heron Hill' in York County, primarily engaged in the breeding and raising thoroughbred and quarter horses.

Dr. Darst was a member of the Commonwealth Club in Richmond, Virginia and the Farmington Club in Charlottesville, Virginia. He also held membership in the Williamsburg Rotary Club and Middle Plantation Club of Williamsburg, Virginia.

He was Chairman of the Colonial Soil and Water Conservation District, an agency of the Commonwealth of Virginia. Dr. Darst was appointed by Governor Allen as Chairman of a State Board to recommend the acquisition of conservation easements. He was President of the Charles City--James City-- New Kent-- York Farm Bureau, as well as President of the Four Rivers Agricultural Services Corp. Dr. Darst served as Secretary for the James City Board of Agriculture.