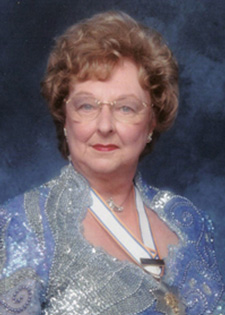 Joyce May McGehee Bockemuehl a native of Memphis, Tennessee. She was the only child of the late Edith May Willis, R.N. of Louisiana and Herbert Hillery McGehee, of Mississippi.

Mrs. Bockemuehl attended public schools in Lansing and Detroit until leaving for Ann Arbor and the University of Michigan where she was a political science major and planned to continue to law school. Marriage to Robert Russell Bockemuehl changed those plans. Mr. and Mrs. Bockemuehl have one son, Kenneth Forrest Bockemuehl and two grandchildren Brooke Nicole Bockemuehl, Esq. an attorney in Fort Myers, FL and Russell Forrest Bockemuehl of Gainesville, FL. Robert is a retired electrical engineer and department head of the General Motors Research Laboratories who volunteers his talent at Recordings for the Blind and Dyslexic reading text books in scientific fields

Mrs. Bockemuehl was the Patron for the Hereditary Society Blue Book in 2000.

Mrs. Bockemuehl was a fifty-year member of the Order of Eastern Star, a twenty-seven-year member of The Village Woman’s Club, a private club with a philanthropic arm of community outreach, a thirty-year member of the P.E.O. sisterhood providing educational opportunities for women, offering scholarships and grants to assist women attain their goals.

Joyce authored one 700-page book Ezekiel Ross Jaques and Mary Evelyn Sering, Some of Their Ancestors and Descendants. She also worked on a book outlining and documenting her French lineages taking her from Louisiana to Quebec and Acadia.

She was made a Kentucky Colonel, she was a 27-year member of New England Historical and Genealogical Society and a longtime member of the Society of Genealogists in London.

Her avocational interests included philately, miniatures, needlework and music. She served on the state board of the Federation of Music Clubs where she administered a music therapy scholarship for 15 years. However, her devotion to genealogy took over. Consideration was given to becoming a certified genealogist but she found helping others find their lineages and membership in hereditary societies more rewarding.