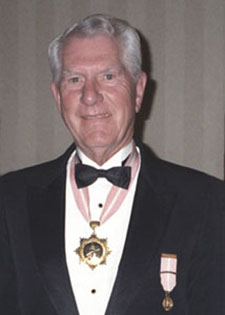 Eugene Arthur Fortine was born in Maracaibo, Venezuela, the oldest son of Dwight Hugh Fortine and Alice Frances Wilson. He returned to the United States with his family, and grew up living on or near oil fields in California. Mr. Fortine attended Stanford University where he was graduated with both a B.S. in Petroleum Engineering and an M.S. in Petroleum Engineering. While at Stanford, Mr. Fortine met his wife, Patricia Ann Jones. They were married for over fifty years, and have four children, (Alan David Fortine; Judith Lee Tillar; Linda Jean Yale; and Terri Fortine Baker) and eleven grandchildren.

Mr. Fortine worked as a petroleum engineer for Richfield Oil Company (now ARCO), and then for the United States Army with the Corps of Engineers, working at the Engineer Research and Development Labs at Fort Belvoir, Virginia. Mr. Fortine also worked in the architectural aluminum business, as a partner in industrial hardware sales, and as a construction estimator for roof-framing and glass and glazing companies. He retired from full-time employment in 1996. Gene passed away in Waco, Texas on December 1, 2005.

Mr. Fortine enjoyed wine tasting and collecting fine California wines. He was an avid tennis player, and indulged in watching American Football. He enjoyed duplicate bridge, as well. Mr. Fortine secured a patent from the United States Patent Office for the mudsill anchor.

He and his wife were members of the First Presbyterian Church of Berkeley, where Mr. Fortine served as an elder.