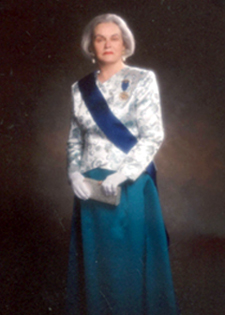 Mrs. Helen P. Poindexter DeVoe, the daughter of Archie Poindexter and Inez Houdeshell, was born in Indiana. She was married to the late Mr. Paul Volney DeVoe, and had two children; the late James Frederick DeVoe and Judith Ann DeVoe-Stafford. Mrs. DeVoe graduated from Ball State University with a Bachelor of Arts degree, and complete some graduate work. She retired and resided in Indianapolis, Indiana.

Mrs. DeVoe was the Patron for the Hereditary Society Blue Book in 1995.