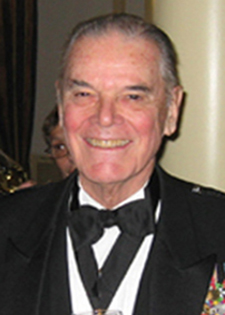 Dr. Darlington was graduated from Columbia University with a Bachelor of Arts in 1949. He received his LHD (hon) from Saint Paul's College in Lawrenceville, Virginia. Working with IBM immediately after graduating college, Dr. Darlington eventually became a partner and investment executive with Hill, Darlington and Co., as well as a member of the New York Stock Exchange. Dr. Darlington also worked as Branch Office Administrator for ten years at Loeb, Rhoades and Co.

Dr. Darlington was a Lieutenant (J.G) in the United States Naval Reserves between 1943-46. He and his wife resided in Palm Beach, Florida.

Dr. Darlington was an active member of the Episcopal Church for many years, serving in a variety of roles. Dr. Darlington was appointed to be the presiding Bishop's representative to the Anglican Bishop in Jerusalem for the Gaza Hospital Project. He served on the board of directors for the Episcopal Missions Society and the Federation of Protestant Welfare Agys, and was a former Trustee on Board of Foreign Parishes. He was a member of St. Paul's Church in Rome and St. James' Church in Florence, and former warden of Eglise Francaise du Sanit Esprit.

In New York City, Dr. Darlington was a member of the Union Club; the University Club; Everglades Club; Army and Navy Club; and Piping Rock Club. He was a member and former trustee of the Alpha Chapter of Delta Psi. Dr. Darlington maintained membership in the New York Society of Military and Naval Officers of the World War, and the Navy League of the United States.