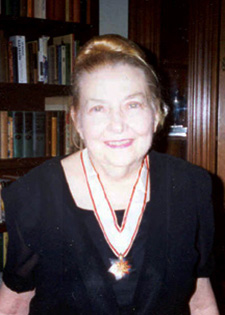 Mrs. Gabrielle Maupin Bielenstein, the daughter of William Gabriel Maupin and Florence Mary Brayley, was born in Portsmouth, Virginia. She met and married her husband, Johan Henrik August "Hans" Bielenstein, in Canberra, Australia, where they lived for a number of years. Upon Dr. Bielenstein's appointment to a chair at Columbia University, the Bielensteins moved to New York City, where they reside today. Dr. and Mrs. Bielenstein have two daughters: Danielle Erika Mary and Andrea Johanna Gabrielle Bielenstein.

Mrs. Bielenstein was educated at a series of small private schools, including Holton-Arms in Washington, D.C. She took her B.A. at Sweet Briar College, where she was a member of Phi Beta Kappa. Mrs. Bielenstein completed her M.A. on a Fullbright Scholarship at the University of Melbourne.

Mrs. Bielenstein is a member of the Princess Anne Club in Virginia, and the New York Junior League.