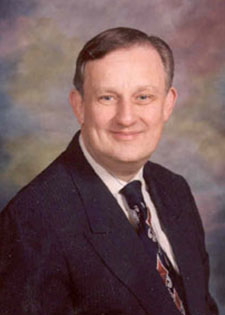 David Ralph Curfman, M.D., was born in Bucyrus, Ohio, the son of Ralph Oliver Curfman and Agnes Mozelle Schreck Curfman. He was married in 1970 to Blanch Lee Anderson.

In addition, Dr. Curfman was an accomplished musician, having studied both piano an organ. His life-long interest in choral music and liturgies involved him in instruction at the Lutheran Theological Seminary in Columbus, OH. Dr. Curfman was a frequent lecturer in Judeo-Christian ceremonies and liturgies. As dean of the District of Columbia Chapter, American Guild of Organists, he subsequently served as Washington Program Chairman of the International Congress of Organists, held for the first time in the United States in 1977. He was also a former member of the development committee for the national office of the American Guild of Organists and a member of the Royal School of Church Music (England).

He has been an elected trustee of the Board of Cathedral Choral Society, completed two terms as president, and was music repertoire planning chairman for the 250-member chorus for several years. He also served on the board of the Leo Sowerby Foundation; historian and board member of the Christmas Pageant of Peace (National Christmas Tree Lighting by the President); President of the Board of Directors of the National Columbus Celebration Association (Washington, D.C.); and a founding supporting member of the United States Capitol Historical Society.