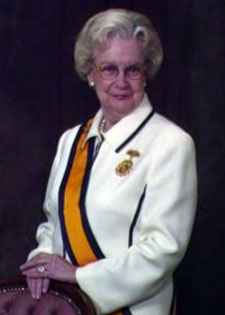 Sarah Jean Owen Dunaway was born in Atlanta, GA, the daughter of James Newton Owen and Hattie Maybelle King. She was married in 1981 to the late John Allen Dunaway, Sr. Mrs. Dunaway was Office Manager of the Atlanta Sales office of Progressive Farmer and Southern Living magazines. She continues to reside in Atlanta, where she remains active in the local community.

Mr. and Mrs. Dixon were residents of the historic district of Alexandria, Virginia for over forty-four years.

Mrs. Dunaway was a board member of the DeKalb History Center; the Hebron Historic Society; the Georgia Women of Achievement; the Historical Oakland Cemetery Foundation; and the Marietta Confederate Cemetery Foundation, Inc. She also served as Chairman of "Save Georgia's Historic Flags" collection in the State Capitol Museum's Hall of Valor.

Mrs. Dunaway was honored by the Georgia Historical Records Advisory Board with the Award for Advocacy, "for her tireless efforts on behalf of the preservation of historical records in Georgia". Furthermore, she was the recipient of one of the Annual Georgia Governor's Awards in the Humanities, honoring those who have fostered an understanding of Georgia's cultural traditions, thereby strengthening community, character and citizenship in the State.

She was an active member of Westminster Presbyterian Church of Atlanta.