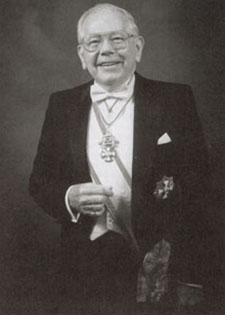 Grahame Thomas Smallwood, Jr., the son of of Graeme T. Smallwood and Dorothy (Hubbell) Smallwood, was born in Toledo, Ohio on February 26, 1919. Mr. Smallwood spent his youth in Washington, D.C. and then lived in Philadelphia, PA, Salt Lake City, UT, and finally Potomac, MD. He studied at the College Moderne in Geneva, Switzerland and at the Lycée de St. Gilles in Brussels, Belgium. Mr. Smallwood died on December 3, 2000, and is survived by his sister, Mrs. Paul Milton Niebell, Sr. (Beasley - Eleanor Warrene Smallwood)

Mr. Smallwood served in the Pacific in World War II as an U.S. Army counter-intelligence agent. He had a twenty-eight-year career with TWA, both as an account executive, then as Eastern Regional Advertising and Sales Manager. After retiring, he pursued his genealogical endeavors and moved to Salt Lake City, Utah.

"Chips" was a cultured and talented man in all of his chosen fields and was recognized as a premier leader in hereditary societies. There were sixteen lineage societies fortunate to have had "Chips" as their leader and friend. He was respected researcher, author and co-founder of several lineage societies.