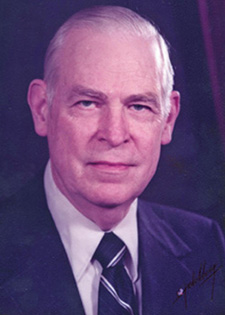 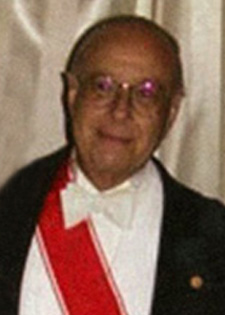 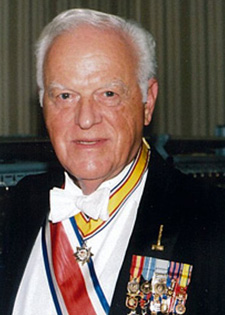 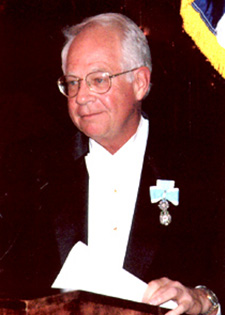 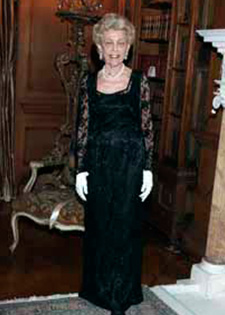 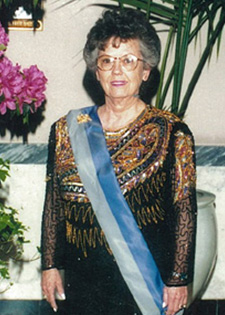 Dr. Philip Wendall Bernstorf, the son of Dr. Philip Herman and Mona Eva Rucker, was a native of Cheney, Kansas. He was graduated from Friends University with honors, and was a member of the Order of the Tower Honor Society. He attended Washington University School of Medicine and was an Honor graduate and a member of Alpha Omega Alpha Honor Society and 1st Lieutenant of Medical ROTC in 1941. Phil saw service in WW II in England, North Africa and Italy, having active duty with the Army Medical Corps from 1942 thru 1945. He returned to Wichita, Kansas and became a Resident in Medicine at Wichita VA Hospital.

Dr. Bernstorf met Betty Jane James at the VA Hospital where she served as his Medical Secretary. They were married in 1949 while he was an instructor at the Arkansas School of Medicine. They returned to Wichita the next Christmas, when Dr. Bernstorf became the Assistant Chief of Medicine at the VA Hospital and became active with the 89th Reserve Training Division, later the 89th ARCOM. He retired in 1975 with 33 years’ service, as a Colonel.

At the 2007 Stated Meeting of the Kansas SAR, Dr. Bernstorf was presented the first of the NSCAR-SAR Gold Medal of Appreciation for his "outstanding dediction" to the workings and operation between the senior and junior organizations.

Dr. Cramer Reed, a classmate from Washington U. and 1st Dean of the KU School of Medicine, Wichita, recruited Phil to help with the establishment of the School and he taught there, following his retirement from VA. In 1978 Phil became active with Sons of the American Revolution where he worked with Dr. William Reals (a later Dean of KU School of Medicine, Wichita) and followed Bill as President of Washington Chapter of KSSSAR.

In 1980 he was invested as a Fellow in the American College of Physicians. In 1983 he attended the Treaties of Paris and Versailles Celebration as an SAR Delegate and then went to Grenoble as a representative of KU’s beginning Geriatric Program to attend a “care of the dependent elderly” symposium. He then became President of the KS Society, later Vice President General of South Central District, served as Trustee from Kansas, Switzerland and Germany, as VPG of Western Europe and served as Surgeon General of the National Society; was appointed SAR National Chairman of CAR for nearly 25 years, received the DAR Medal of Honor and was awarded NSSSAR’s most prestigious award as a Minute Man. He was elected as a Senior Vice President of National Society Children of the American Revolution.

He held membership in a total of 28 lineage societies and had served as President General of the National Huguenot Society and as Governor General of Sons of the American Colonists. He held many committee assignments in many of the societies in which he was active. He attended the “Hereditary Fortnightly” in April in Washington for 25 consecutive years.

Richard Curtis Deyo was a native of Elizabeth, New Jersey. He was a direct descendant of Christian and Pierre Deyo, two of the original twelve Patentees who settled the French Huguenot community at New Paltz, New York. Mr. Deyo attended The Pingry School. He completed his undergraduate work at Princeton University, and received his MBA from Harvard Business School. From 1962 to 1968, he was a member of the United States Army Reserve. Richard Deyo Curtis and his wife, Kathy have one daughter, Alexandra.

Mr. Deyo was Chairman of the Milburn New Jersey Township Historic Preservation Committee. He also served a term as president of his Princeton class. Among his interests were numismatics, archaeology, and classical architecture.

Lowell Varner Hammer, son of the Rev. John Domer Hammer and Edythe Lenore Varner, was a native of Ligonier, Pennsylvania. Mr. Hammer was graduated from Pennsylvania State University with a B.A., and the Fletcher School of Law and Diplomacy, with an M.A.

Following his graduation from the Pennsylvania State University in 1950, Mr. Hammer entered the U.S. Army and served on active duty for three years during the Korean War. He served first in the enlisted ranks of the Infantry and after graduation from Officer Candidate School, he served as a commissioned officer in the Field Artillery. He then was posted for several months in the U.S. before being transferred overseas to the Far East Command. Upon concluding his active duty service in the fall of 1953, he attended the Fletcher School of Law and Diplomacy in Medford, Massachusetts where he earned his graduate degree in 1954.

In August, he went to Washington, D.C. to commence what became a forty-year career in the Federal government. After serving thirty years as an officer in intelligence, national security and foreign affairs, Lowell retired in 1985, but returned to government service shortly thereafter and worked as a consultant for another ten years. During his government career, he was stationed abroad in U.S. Embassies in North and Central Africa and in Western Europe and traveled widely in Africa and Europe.

During his early Washington years, Lowell met Elizabeth Carter Bowers who had just returned from an overseas assignment and they were married in 1956. Lowell and Betsy had three children, Sarah Elizabeth (now Mrs. Jeffrey Haberl), Lowell Carter, and Christopher Allen (deceased). In 1997, Lowell and Betsy moved to Florida where they resided for nine years before moving to College Station, Texas. As hobbies, in addition to his genealogical and historical pursuits, Lowell engaged in oil and water painting, photography, antique restoration, artifact preservation, and other art and writing activity.

Educated at Woodberry Forest School and St. Christopher's School, Mr. Norfleet was graduated from Washington & Lee University, where he received his Bachelor of Arts, and the Stonier Graduate School of Banking at Rutgers University. During Vietnam he served as a Lieutenant in the United States Navy.

Mr. Norfleet is a retired Corporate Executive Vice President and Senior Credit Officer for Crestar Bank (now SunTrust). Mr. Norfleet serves as the current President General of the Society of the Cincinnati.

Margaret Jean Whittington Pigott is the daughter of the late Earle Ligon and Margaret Loucilla Whittington. Mrs. Pigott was married to Dr. John Douglas Pigott, Jr. for over sixty-one years, prior to his passing in 2006. Dr. Pigott, a graduate of Northwestern Medical School, practiced surgical oncology for over forty years. Dr. and Mrs. Pigott have two children. Their daughter, Deborah Moore resides in St. Louis, Missouri with her husband, a practicing attorney and their four children. Their son, Dr. John Douglas Pigott, Jr. is a cardiovascular surgeon practicing in New Orleans, where he resides with his wife and two children.

Mrs. Pigott attended Saint John's Methodist Church, and was past President and Secretary of the Women's Society. She was a member of the English Speaking Union, the American Cancer Society, the Memphis and Shelby County Medical Auxiliary, the Lawn and Country Garden Club, the Memphis Glass Collectors Club, the Brooks Art Gallery, the Brooks Museum League, the Dixon Art Gallery and Gardens, and the Women's Exchange of Memphis.

Patricia Jane Scruggs Trolinger, daughter of the late David Richard and Frances Roberta Smith Scruggs, was a native of Madisonville, Tennessee. The daughter of an FBI agent, Patricia met her husband, Donald Cecil Trolinger, at Tinker Air Force Base. The couple were married over fifty years. Mr. Trolinger, was a retired US Air Force Lieutenant Colonel, who served as a pilot for over twenty years. The Trolingers have two children. Richard of Bartlesville, Oklahoma and Betty Giffhorn of Tulsa, Oklahoma. Richard and his wife have two daughters, Alexis and Ellie. and Betty and her spouse, Matthew Giffhorn have twin sons in Christopher and Benjamin and a daughter, Katharine.

Mrs. Trolinger was a founding member of the Scruggs Family Association, a family lineage organization that is associated with the Scruggs family. She was President for many years and the first editor of the organization's publication "Searching for Scruggs" She was Tribal Historian for the Modoc Tribe of Oklahoma from 1978 to 2003 and wrote the "History of the Modoc Tribe of Oklahoma" in 2003.

She served on the Board of Directors of the Ottawa County, Oklahoma Historical Society for many years. She also served as President of the Miami Animal Welfare Society. Mrs. Trolinger served her church, First Presbyterian, as a deacon and numerous committees.